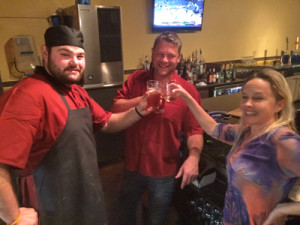 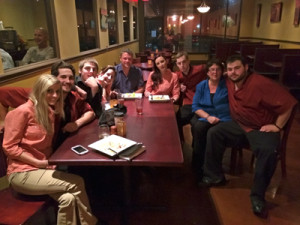 Rik’s Cafe is the culmination of years of time and experience spent in the restaurant industry by owners Rick Chalker and Chef Arik Mills. We are driven to provide our guests with epic food and outstanding service in a warm, friendly and casual environment.

Rick began his foray in the restaurant business growing up in Ocean City Maryland. For the next twenty four years Rick waited tables, tended bar and managed restaurants in Maryland, San Diego, Miami and Virginia. Ten years ago he plunged into the corporate restaurant world and was Managing Partner of the Longhorn Steakhouse in Hagerstown, where he met Arik. They decided it was time to get out of production and put some fun and creativity back into their lives, and so came up with the concept of a welcoming and comfortable gathering place with exceptional food. Hence, Rik’s Cafe Right on!

Arik grew up in Fulton County, Pennsylvania. His culinary career began at the Lockhouse Restaurant in Hancock, Maryland, as a dishwasher! Not long after starting he began his path to Sous Chef. Arik followed his mentor, Tom Lombardo on his venture to open up The Corner Steak and Sea in Berkley Springs, West Virginia. When Tom opened up his second restaurant Arik became Head Chef at the new location. After 4 years with The Corner, he took a position with Longhorn Steakhouse in Hagerstown, where he became a Key Employee, focusing on food safety and sanitation. Arik spent four years with Longhorn prior to teaming up with Rick to fill a culinary void existing in our town.